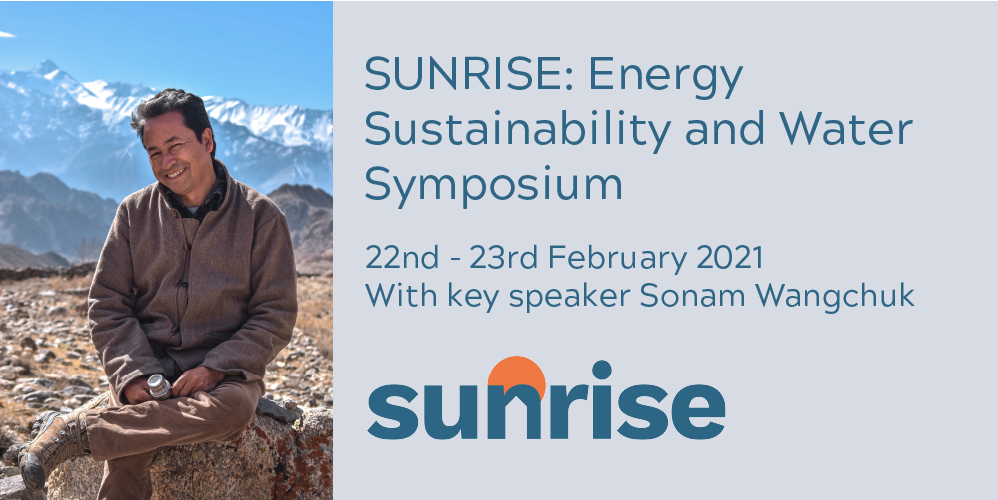 Next Monday, Indian innovator and education reformer Sonam Wangchuk will be presenting at our biannual SUNRISE symposium, hosted online this year by IIT Kanpur. Find out a bit more about him below, and why we are excited to hear him talk.

Wangchuk is known for inventing the ‘Ice Stupa’, an artificial glacier used for storing water. In the cold desert region of Ladakh, farmers were facing a water crisis in the planting months of April and May, before the natural glaciers had started melting. The Ice Stupa stores water that would otherwise go unused during the winter to be melted during the summer when water is scarce, allowing the farmers to water their crops.

Further achievements have been in education reforms. Wangchuk founded the Students’ Educational and Cultural Movement of Ladakh (SECMOL) in 1988. In 1994, they launched Operation New Hope, a collaborative campaign of government, village communities and the civil society to bring reforms in the government school system and make it more functional and effective.

The SECMOL campus is made of compacted earth and run entirely on solar power, keeping its occupants warm even in -30 degrees Celsius. The campus also incorporates several renewable technologies, including a solar cooker that uses mirrors to focus sunlight and boil water. SECMOL is home to about 70 students who maintain and run the campus themselves on a democratic basis.

We are looking forward to what will surely be an inspiring talk, as Sonam Wangchuk’s impressive career has covered many of the same themes that we aspire to at SUNRISE: innovative clean energy, interdisciplinary collaboration, and community initiatives that improve the lives of local people.

Whilst we were disappointed to be unable to meet in person at IIT Kanpur this month, online conferences such as this one allow us to hear from and connect with exciting people from all around the world, expanding the scope and ambitions of the SUNRISE project.