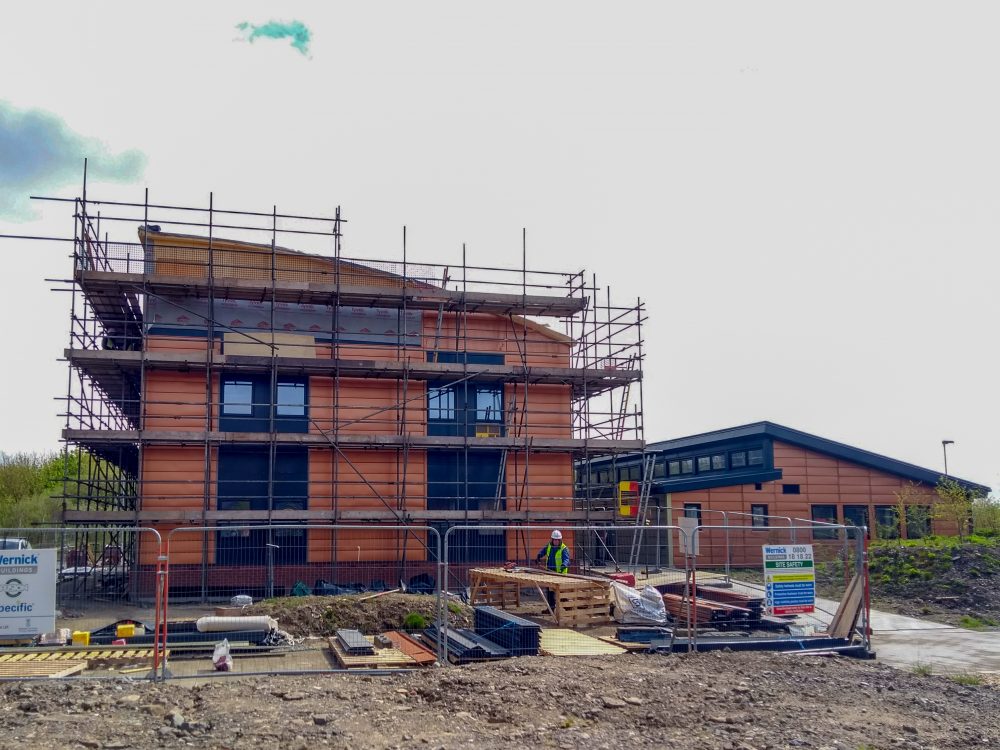 The assembly of the SPECIFIC Active Office at Swansea University’s Bay Campus is advancing at an impressive rate. This newest construction in the line of ‘buildings as power stations’ follows on from more than 25 other renewable energy demonstrators including ‘The Pod’, the SHED, and the Active Classroom. Due to Wernick‘s off-site construction the build is on-schedule to be completed by the end of May, meaning it will have been conceived, designed, and built in just nine months.

Substantial developments in April included the last of the Colorcoat Prisma cladding being installed so that it now fits in with its neighbouring Active Classroom and Energy Safety Research Institute. And earlier in the month, the BIPVco photovoltaic roof was completed, which is made up of thin-film solar cells that will power the office. In the next few weeks we can look forward to the scaffolding coming down and the ‘living wall’ going up, which will be filled with 450 plants.

On the inside, the first electrical works have been installed, PV cables have been terminated, and mains water supply connections have been made. The Kelda Technology digital shower systems have also been installed and some internal painting has begun, so it is starting to become habitable!

How does the Active Office relate to SUNRISE?

The progress of the Active Office is particularly exciting for the SUNRISE project because of how it relates to our own ambitions to construct solar-powered buildings in India. These buildings will be based on the ‘Active Buildings’ concept: fully integrated sustainable technology systems that are powered entirely by the energy they generate. Once the Active Office is complete it will serve as an example of what is possible using only renewable energy, though of course much will be adapted to suit the requirements of the rural Indian context. But we’re confident that if the sunlight in rainy south Wales is enough to power a building then the much sunnier climate in India will be more than sufficient!