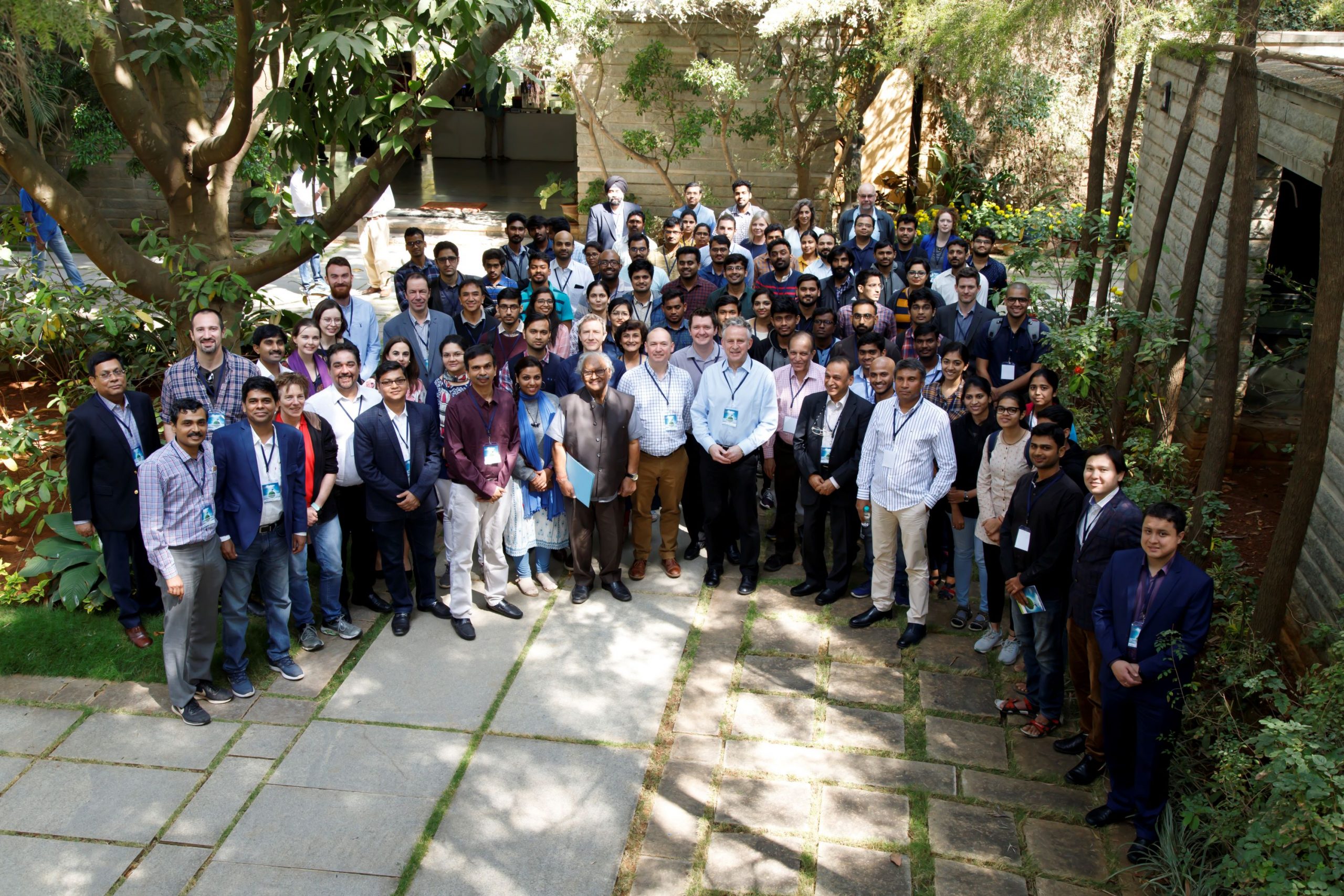 We recently gathered in Bengaluru for the fifth biannual SUNRISE Symposium. This year’s meeting saw speakers and attendees travelling all the way from Mexico and Kazakhstan as well as from across India and the UK. There was lots to discuss and plans to make for a very busy upcoming year!

The first day of the symposium was hosted by Professor K S Narayan at JNCASR. We were all very envious of their beautiful green campus with its award-winning gardens.

After a warm welcome from Narayan, our first speaker of the conference was Ellie Gilvin, our UKRI project officer and head of international development at EPSRC. She gave us a useful breakdown of UKRI’s perspective, including examples of good practice for ‘capacity building’ — a vital aspect to the ‘grow’ consortium of GCRF projects of which SUNRISE is part. ‘Capacity’ is defined by the OECD as the ‘ability of people, organisations and society to manage their affairs’, and its development is therefore crucial to our project to enable maximum possible benefit for all involved.

The rest of the day was occupied by talks from several ‘big’ names in PV from the UK and India — among them Professors Sir Richard Friend (Cambridge), Jyotishman Dasgupta (TIFR), Jenny Nelson (Imperial), James Durrant (Imperial), Satish Ogale (IISER Pune), and Sushobhan Avasthi (IISc). Notably, two speakers covered the topic of green hydrogen, a new and exciting direction for the project.

We had a delicious curry lunch on campus and caught up with friends old and new from across the globe. Prof Ogale even commented in his talk that it’s “always a pleasure to be in the company of the SUNRISE family!”

For the second day we were hosted by Professor Satish Patil at IISc Bangalore, a different but equally beautiful campus! The topics of the day’s talks were much more focused on technology delivery and end-user engagement, the opposite end of the scale to the previous day’s presentations.

Annand Chennira from Micelio Mobility discussed the potential for EVs in India, especially electric rickshaws as 4-wheel EVs are currently too expensive to take off in the Indian market. There are 40,000 auto-rickshaws in Bengaluru alone, and therefore represent a significant opportunity for electrification.

Next was Thomas Pullenkav from Selco Foundation, who create sustainable energy solutions for under-served households and institutions. He introduced the foundation, and stressed the importance of social (e.g. energy cooperatives), technical, and financial innovation working in harmony to create effective solutions for energy access.

We also heard from Arunavo Mukerjee from Tata Cleantech Capital on the Indian battery industry, Jonny Williams who gave an introduction to the Active Building Centre, and Dr Minna Sunikka-Blank from the University of Cambridge Department of Architecture, who presented on the challenges facing the adoption of new energy technologies in slum rehabilitation housing in India.

Later, some of us visited Professor Dasappa’s laboratory on campus to see their biomass gasifier, which could be used as a back-up generator for off-grid solar applications. It is described as ‘fuel-agnostic’ because it can take any fuel from corn cobs to coconut husks!

We ended the day with a lovely dinner on campus kindly organised for us by the hosts.

We returned to IISc Bangalore for the third and final day of the conference. We had several new faces presenting this time, including Dr Nurlan Tokmoldin from IPT Kazakhstan, Dr Kanwar Singh Nalwa from IIT Kanpur, and Dr Dena Pourjafari from CINVESTAV Mexico.

Another new speaker was Khushboo Ahire from the Tata Institute of Social Sciences. She presented on the pilot study she undertook as part of the PIPERS for SUNRISE scheme, and stressed the importance of bridging the gap between new energy technologies and the communities who will be using them. She described some of the participatory arts-based methods trialled during the study. Arts-based methods work well for this type of study because they are able to transcend barriers arising from cultural and linguistic differences, and trigger meaningful discussions between diverse groups.

Finally, we heard from our group of PhD students and the prize winners were announced. Best oral presentation went to Shivam Singh and best poster went to Sukanya Das. They were both presented with a prize by Professor Friend. Congratulations both!

With yet another successful symposium under the belt, we all left feeling accomplished and inspired to keep the momentum going. A few of us also managed to fit in some sightseeing around Bengaluru and in the nearby Mysuru!